WONDERED ABOUT THE THEME SONG OF "COME AND SEE? 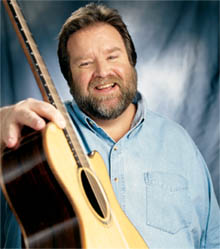 Composer and Singer of the Come and See Theme

Many listeners have asked about the beautiful theme song of the Come and See radio program.  It was written by composer Bob Bennett, an Internationally known Christian artist, who also sings the theme with his own guitar accompaniment.

Sixteen years ago, Bob gave Dr. and Mrs. Robbins permission to use his "Come and See" song for the radio program.  Since then listeners have been blessed by the message and the unique ministry of Bob Bennett.  Those of you who have been listening for some time  already know a lot about Bob just by sensing his spirit and have experienced his witness.

He is unique in that while a musician and artist in Christian music, he is NOT a performer but rather a minister.  That's his life -- to serve his Lord through a unique gift of music and a powerful and real presentation his love for the Lord through Christian music.  His composing skills produce wonderful music and messages that are not like any other other.  Get this.... an award winning musician, he still will do a "house concert" at your home, if you are in the Costa Mesa/LA area.

On his website,  Click here for Bob Bennett's Website  you will find a treasure of information about Bob and be given the opportunity to purchase his music.  It's a different home page so to get to various pages you need to navigate the with the links in the left margin which is encroached by the home page.  We have never had the opportunity to meet Bob personally but are so grateful that he ministers with us each week and prepares your heart for Thomas Q.’s teaching.

Bob's ability to write songs about other than typical "spiritual" topics has always made him stand out a bit from his peers. To Bob, spiritual themes are everywhere, even in the least holy of circumstances. His approach to ministry also follows the same line of reasoning - that our lives are intricately woven with the sacred and the human, and that honest communication is ultimately most effective.

If you tell Bob Bennett his songs don't sound much like Christian music, you're likely to invoke a smile. After all, Bob has always lurked outside the fringes of contemporary Christian music, crafting songs that detail not only his joys and victories, but also his disappointments, struggles and failures.

Bob's acoustic folk-style recordings have honestly confronted the messy side of human existence over the years. But those who have discovered his depth, wit, honesty and musicianship consider him to be one of Christian music's foremost songwriters. His classic tunes  Matters of the Heart,  Man of the Tombs,  A Song About Baseball, and others reveal a songwriting proficiency unmatched among his peers.

Bob was born in Downey, California, in 1955.  He picked up his first guitar at age nine and formed a rock 'n' roll band in high school. In the late seventies he converted to Christianity and his songwriting began to reflect his newfo und faith.  His career was launched with the release of his 1979 folk-style debut recording First Things First.

Three years later came Matters of the Heart, a recording Contemporary Christian Music Magazine voted 1982's Album of the Year, ranking it among the top 20 contemporary Christian albums of all time.  Soon after the release of his next recording, Non-Fiction, he served as opening act on Amy Grant's Unguarded tour.

Lord of the Past: A Compilation followed, with its title song reaching number one on the Christian radio charts in early 1990, followed by his second number one song, Yours Alone.  Later that year Bob joined Michael Card on his Way of Wisdom Tour, performing in front of sold-out audiences across the country.  Songs from Bright Avenue was released in 1991, a collection of songs he wrote while struggling with the dissolution of his marriage.  The years that followed were a time of emotional healing, regrouping and moving forward with his life.  Recently, Bob has found acceptance in the mainstream folk music scene, while performing in music clubs near his home in Southern California.

"I think that accomplishing some sort of ministry by playing music is a completely faulty, frail method that God still manages to use."  Bob says, "To me, my primary goal is to communicate truthfully with people. If I can communicate truthfully the life of the spirit and the always accompanying struggle along the way, then ministry happens as a natural result of that."

Deliberately subjective in his lyrics, Bob allows listeners to eavesdrop on his personal observations and decide for themselves if the words ring true. Ultimately, he reaches into hearts, using his abilities to craft language and music to tell the stories inside each of us.   Again, Bob Bennett's website is: Click here for Bob Bennett's Website

We’ve all had our share of failing to accomplish something that we set out to do.  But, failing in this way isn’t the same thing as failure!   Failure occurs when we give up and no longer think that we can succeed.  So remember, success comes in “cans”  --  failure comes in “can’ts!"  The truth is, “I can do all things through Christ who strengthens me.”  (Philippians 4:13)    -Thomas Q.